General discussion relating to club happenings and items related to Merkurs in general such as "Merkur sightings". If you just signed on, please feel to start a new thread and introduce yourself here. Posts specifically regarding either the XR4Ti or Scorpio should go in those specific forums. Feel free to make suggestions on improving this forum here as well.
Post Reply
14 posts • Page 1 of 1

Our cars are ~30 years old. While the nylon fuel lines seem to be holding up well, the same can't be said for the dual O-rings inside the fittings that attach to the filters and pumps. These O-rings are not the better quality Viton that is typically used today which holds up to the E-10 fuel we typically get. I recently had a leaker on my '91 F-150 which uses the same duck-bill/hairpin connectors. Replacing just the O-rings is possible, but a challenging task as best. Sometimes the O-rings are essentially baked in and imbedded in the groove and can't be removed, especially the O-ring deeper into the connector.

I wanted to find a replacement solution from a more modern vehicle so I went for a quick junkyard run yesterday and found this ^^^ exact connector on a 2005 Focus. It can work - it is a 8mm/5/16" line - but it's downfall is that you need to be applying pressure to the white "button" while pulling the line off. So I kept looking. And soon I found a better mousetrap in a 2008 Focus engine bay. As you can see from my three pics below, the nice thing about this connector is that you push the open end of the "U" clip and it springs upward and stays open in the unlocked position. Then you just pull the line off.

I haven't even checked to see if these fittings are available new, but it should be easy enough to "harvest" these connectors at the junkyard for re-use. As I mentioned, my donor was a 2008 Focus, but they may very well have been used on even later Foci or other Fords. You have two options:

1) Clip the donor connector with a length of nylon line attached. Clip the original connector off your Merkur with a similar length of nylon line attached. Use a barbed union (Dorman 800-012), to make the line whole again.
2) Remove entirely the nylon line from the barbed end of the new (Focus) connector. Note, this might be possible by hitting it with a hair dryer or dunking in boiling water, but probably best done carefully with a razor blade. Clip the original fuel line on the car as close as possible behind the connector. Insert the new (Focus) quick-connector into the newly cut fuel line. There are a couple different tools/methods to do this. You can buy a tool kit specifically for this purpose, but I like this method using some brake flaring tools you probably already have in the toolbox...
https://youtu.be/UeqHYZzFbrI

The challenge we have with the XR is the lines by the filter and external pump (if so equipped) which make multiple 90 degree bends. The Focus fittings (they're probably used on other Fords) do come with a 90-degree version as well as the straight-in as pictured, so something could be figured out with a little creativity. It might require an entirely new line with a re-route - dunno yet.
Brad
Top

This is great. Someone should make a refurb/update kit. Not it.

I like those "pop out" style quick disconnects ("Bundy") as well, but I've never seen them in the aftermarket. The first one you posted is quite common these days, and I've never had a problem "pushing the button" to get them loose.

I've never fully understood the various styles & releases on these fittings, why one is chosen by the factory over another. Last weekend I was working on a friend's '07 F150 and noticed the fuel filter uses two different style quick disconnects... the rearward one is a "new style" duckbill (a little button pops out to release the clip) but the forward one is the type that requires a tool to release a spring. I can't fathom why one fuel filter uses two different connectors! My '08 9-3 uses the button-style connectors everywhere.

There is a third option for splicing nylon fuel lines together -

It' *seems* super janky, but it does work. I used one years ago in the return line on my SPG (Frankenstein'd tank+pump+fuel rail) and had zero issues. More recently, I used one on the feed line of another car. 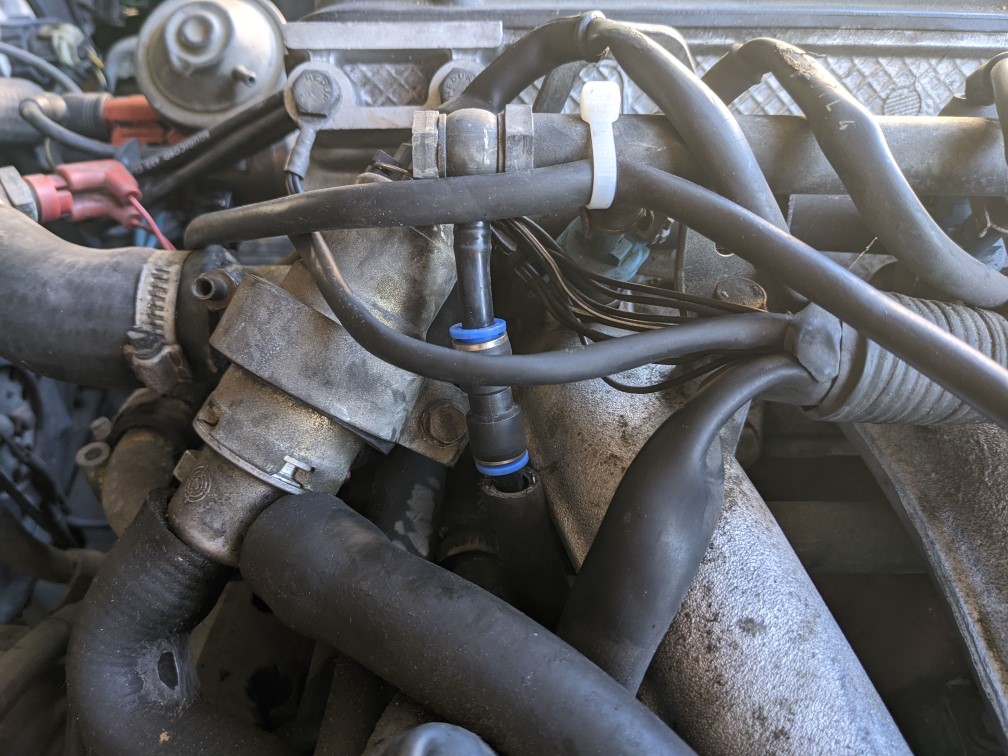 The key is to make sure the tube is cut perfectly straight. If it is, this fix should be totally reliable.

Oh, and you can create bends in these tubes. McMaster sells mandrel springs specifically for the purpose. Insert the spring, heat the line, form the line, let it cool, remove the spring. I've done it a few times.... the first was a disaster, but I've gotten better. At least in a big space.... I've been trying to get good at making quite small assemblies and had zero luck at it.

thesameguy wrote: ↑
Fri Oct 30, 2020 2:49 pm
I like those "pop out" style quick disconnects ("Bundy") as well, but I've never seen them in the aftermarket. The first one you posted is quite common these days, and I've never had a problem "pushing the button" to get them loose.

I would have been happy enough with the constant-pressure type release, but I was very happy to have kept looking and found the pop-out style. Often in the real world these fittings get buggered up over time and don't release so easily. By having the release system as two discreet steps, the potential for problems decreases greatly.


thesameguy wrote: ↑
Fri Oct 30, 2020 2:49 pm
I've never fully understood the various styles & releases on these fittings, why one is chosen by the factory over another.

I've often had the same thought, "Why so many different connector types?" Just make them a different size if you want to make sure the delivery and return lines don't get crossed up.

I also came across these ^^^ during my research and also was not a fan. I'd really prefer to avoid any union fittings at all, though I realize it is a viable solution. I prefer for things to not only perform but look right.
Brad
Top

I'm finding that in order to fit the OMP front strut tower brace, I'm going to have to rework the fuel lines. I'm not replacing the fuel rail, yet, so are there good options to use another connector on the stock fuel rail and hard lines coming up from under the car in that location?

I assume I could pull the fuel rail and hard lines, then put in some sort of AN fittings on both ends and do braided lines between them?

Why don't you want to replace the fuel rail? The one from the late-80's Fox body 2.3 vehicles works well and uses the more modern spring-lock connectors. FWIW, I think I have one listed for sale in the Classifieds.
Brad
Top

Where's the actual clearance issue? I'm having problem visualizing an issue where the manifold clears but the fuel lines don't.
Top

Here’s where I’m having the issue. The return isn’t really an issue, but I’d like to clean it up, but the feed line is a problem. Maybe a straight bar wouldn’t have this issue, and would save me from changing the way the wiring and vacuum lines span the false firewall too.

DPDISXR4Ti wrote: ↑
Mon Nov 16, 2020 3:36 pm
Why don't you want to replace the fuel rail? The one from the late-80's Fox body 2.3 vehicles works well and uses the more modern spring-lock connectors. FWIW, I think I have one listed for sale in the Classifieds.

Well, one thing you could do is get rid of the damper. It is there for a reason, but at the same time it's not critical to function. If you're using the original fuel pump I'd be more inclined to leave it, but if you've upgraded pumps to a Walbro for example you're probably okay to just remove it.

Alternatively you could replace the quick-disconnect on the outside of the damper with a right angle version as we discussed above... like so:

Well, "good" is probably an overstatement. The damper is there to prevent damage to the fuel pump and undesirable flow characteristics from resonance in the fuel system caused by the injectors opening and closing. My belief/theory/guess is that the '70s era fuel pump the factory supplied is just not that robust, and the damper is there to save it from this resonance. My belief/theory/guess is that a big ol' Walbro pump is designed to be used with big ol' injectors and would be less susceptible to problems from this effect, at least at power levels (and fuel flow requirements) we commonly discuss. You'll find a similar pump on any modern car, and they don't use fuel dampers... Of course, [insert disclaimer here] but I yanked my damper when I installed the Walbro 10 years ago, and there's been no issues as a result.
Top

The duck-bill (AKA hairpin) connector you've shown above is indeed the type that would be replaced by the later Focus connectors I've shown above. But it won't really buy you any space by itself - it's just that if you re-plumb the lines it would make sense to go with a more use-friendly connector as part of the project.